Home > Bridal Arrangements > Bouquets to Present to Mother of the Bride

Bouquets to Present to Mother of the Bride 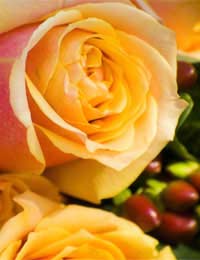 In this day and age the flowers associated with the mother of the bride are varied. A mother may opt to carry a full bouquet during the wedding ceremony, a mother may not want to carry any flowers at any time and/or a mother may be surprised at the reception by a beautiful bouquet or arrangement that she knew nothing about. While it should generally be a mother’s decision as to what to carry at the wedding, surprise floral gifts to thank a mother are always appropriate as well.

Mother Of The Bride Bouquets For The Wedding

There is no such thing as one type of mother of the bride bouquet for wedding ceremonies. Some mothers prefer to carry a small nosegay of flowers matching the bridal party’s bouquet, some mothers enjoy carrying a floral pomander, some mothers opt for carrying a single stem and still other mothers decide to wear corsage, wristlet or hairpiece full of flowers. Most times a mother of the bride makes this decision on her own, though of course the bride often has input.

If the bride chooses to acknowledge both her mother and her stepmother by asking them to carry flowers then everyone should respect this decision as well. Some brides also choose to select small flower acknowledgements such as corsages or wristlets for their grandmothers as well.

Presenting The Mother Of The Bride With Flowers

Many brides choose to publicly thank their mothers for all of their help with the wedding preparations by presenting them with flowers following the wedding ceremony. In this case the flower arrangement can be as big and/or bold as the bride chooses. The flowers do not need to match the flowers of the wedding party, wedding ceremony nor the arrangements at the reception site. Instead, opting to give the mother of the bride her favourite flowers is always a nice idea. Alternatively, giving the mother of the bride a classic bouquet of roses, tulips or lilies is appropriate as well.

If a stepmother of the bride is to be thanked then the bride will need to decide on her own if she would like to present both women with the same flowers or if different bouquets would be a better idea. If it does not seem natural to present the mother of the bride with flowers at the reception or in public, then having a bouquet delivered the day after the wedding would be appropriate too.