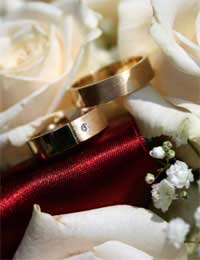 Hand tied bouquets are perfect for brides who are interested in uncomplicated flower arrangements. These bridal bouquets do not overpower the bride, nor are they complicated enough to take away from her dress or hairstyle. These bridal bouquets tend to be round in shape and the flower stems are tied with simple ribbon, sometimes embellished slightly with fake pearls or gemstones.

Cascade bouquets, also known as shower bouquets or waterfall bouquets, are a traditional type of bridal bouquet. These bouquets tend to have a centre bouquet with greenery or extra blooms that trail down the front creating a cascade/shower/waterfall effect. A selection of wedding flowers throughout the ages will feature cascade bouquets as these have been a popular choice for many years.

Over arm bouquets, also known as arm bouquets or sheath bouquets, are usually made up of long, slender flowers such as lilies or long-stemmed roses. These bridal bouquets make the most of the stems because they are carried “beauty queen style” in the crook of the bride’s arm. This is a relatively contemporary style.

Pomanders are spherical bouquets that look like a ball of flowers suspended from a ribbon. The ribbon may be carried in the hand or looped around a bride’s wrist. Generally the flowers used in this type of untraditional bridal “bouquet” are round as well.

Wristlets, also known as corsages, are another untraditional choice for brides. These small “bouquets” are worn on the wrist and leave the bride’s hands free throughout the wedding and reception. Wristlets are very easy to save, dry and keep forever as a wedding memento.

Many modern brides are opting to forego an entire bridal bouquet and carry just a single stem. Brides that do choose to carry single stems usually opt for their bridesmaids to carry a single stem as well, though it does not necessarily need to be the same type of flower carried by all.

Bouquets to Present to Mother of the Bride